Chris Beardshaw recently said that he felt Chelsea show gardens should only be accepted if they were going to be relocated afterwards. It seems that other designers may be following his lead as this year’s show sees more of the gardens and planting being relocated than ever before. The recipients of the gardens are diverse; ranging from a refugee camp, a higher education college, the grounds of the Epilepsy Society, a community garden in Westminister and the grounds of the Hospice of St Francis in Berkhamsted.

An average of 3010 plants are used in each show garden and many of these are borrowed then returned after the show; in fact some of the plants are Chelsea veterans, reappearing in different gardens year after year. The Weston Garden embraces the philosophy of reusing materials – many of the plants have been borrowed for the duration of the show from Crocus and the rest will be reused afterwards. Plants from The Morgan Stanley Garden for the NSPCC, designed by Chris Beardshaw, will be donated to the NSPCC who are organising plant sales in Barnet, North London and Maidstone, Kent. Across the whole show plants will be collected and redistributed to local schools and community gardens across East London and beyond as part of a reuse scheme set up by the landscape, architecture and art collective Wayward. 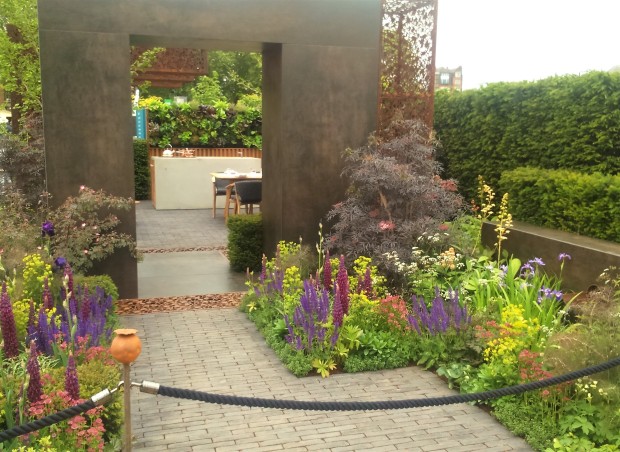 The RHS Feel Good Garden is another design which is intended for a new life after the show. It will be relocated to the Camden and Islington NHS Foundation Trust which provides care and treatment to vulnerable adults in a build up area of London where green space is limited. Matt Keightley, the designer and twice-winner of the RHS/BBC People’s Choice Award, visited the NHS site in April. He said ‘I am delighted that the RHS Feel Good Garden will live on, providing a calm and beautiful space for adults in need of respite.’

The RHS Feel Good Garden, destined for an NHS Trust site after the show

Matt is also creating a health and wellbeing garden at RHS Wisley, due to open in 2020, and the RHS Feel Good Garden is inspired by his Wisley design. With an increasing evidence base demonstrating the positive effect that gardens and gardening can have on mental health, the joint venture between the RHS and NHS to gift the garden to a mental health trust site signals the growing awareness of these benefits across the healthcare profession. 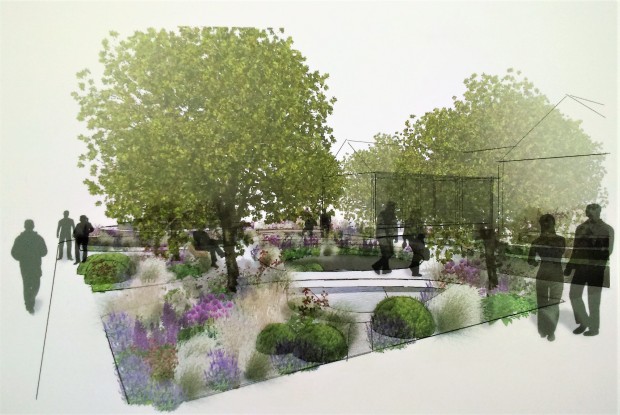 Sitting in the garden you are surrounded by soft planting in lemon, green and blue with bursts of deep reds and purples. It’s a relaxing space which also entices you to reach out and engage with your environment.

The mellow sandy and chocolate coloured paving is laid transversely to give a sense of width to the space, encouraging the visitor to slow down and enjoy the journey through the garden. I like the way the planting falls across the pathway and Matt has chosen many aromatic plants like thyme, rosemary, mint and sage to create scent as you move around the garden.

Mellow paving to match the planting

Grasses such as Deschampsia cespitosa, Briza media,  Melica nutans and Stipa tenuissima, alongside naturalistic perennials like Pimpinella major ‘Rosea’, Astrantia ‘Moulin Rouge’, Achillea ‘Moonshine’, Cirsium rivulare and Dianthus cruentus create an airy filter through which the more textural plants like the ferns can be seen. The light planting also softens the cantilevered stone terraces which appear to float above the plants, grounding the visitor in the sanctuary of the garden.

The layers of planting build up texture in the garden

The shade loving epimedium, ferns and acorus create a sense of intimacy in these stone cavities

The mushroom seats create more floating structures within the planting. Herbs predominate in this area so that visitors have to step on the mint and rosemary to access the stools and the scent emanating from beneath your feet commits the mind entirely to the present moment.

I sat in the garden for a while, contemplating the way it made me feel. I had a sense of being grounded in the moment; I was relaxed yet at the same time completely engaged with my environment. If the garden can foster the same feelings of happiness in the patients, staff and families at the Camden and Islington NHS Foundation Trust that I felt yesterday, it will be an extremely worthwhile addition to the site and will hopefully encourage more dialogue and practical projects based on the important relationship between gardens, gardening and mental health.

The RHS Feel Good Garden – inspiring on so many levels

2 thoughts on “Health, Wellbeing and Sustainability at the RHS Chelsea Flower Show”