Earlier this year I brought my overwintered chillies out of the spare room and sowed a range of new seeds in the hope that I would be knee-deep in chillies by the end of the summer. I’ve been pleased with the results of what has ended up as a collection of 39 plants with 17 different varieties.

We’ve enjoyed endless suppers of ‘Hungarian Hot Wax’ chillies stuffed with cream cheese. Despite ‘Hot’ in the title, HHW is actually a mild 2000-8000 on the Scoville heat scale. I sowed an entire seed packet because the seeds were out of date and was amused and surprised when they all germinated. Even after selling many of them at the school fete plant stall I have had enough HHW chillies to dine royally throughout the summer. 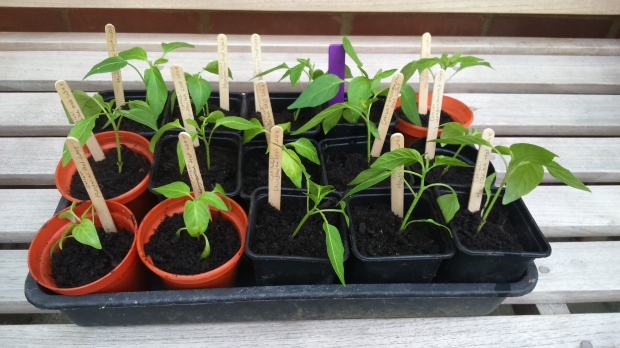 One of my trays of Hungarian Hot Wax 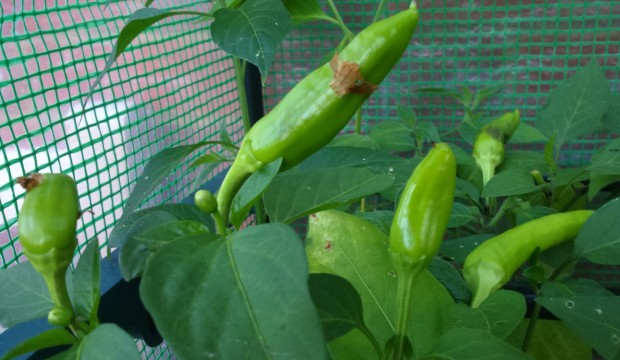 ‘Purple Gusto’ has been another favourite, with good production rates and a spicy Scoville rating of around 10,000. The fruits mature to a beautiful deep purple, creating an attractive display.

‘Cayenne’ did well as usual and produced lots of long, spicy fruits (30,000-50,000 SHU) and I also grew ‘Cheyenne’ which at first I thought might be the same variety with a different spelling, but actually turns out to be a fatter chilli which matures to an attractive orange colour and has a SHU of around 40,000. 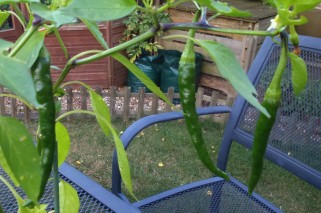 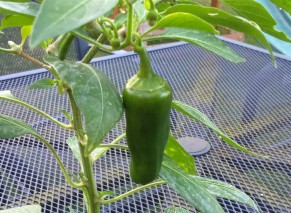 Another favourite which overwintered successfully and has produced a good crop is ‘Aji Crystal’ which has a spicy citrus tang and scores around 50,000 SHU. 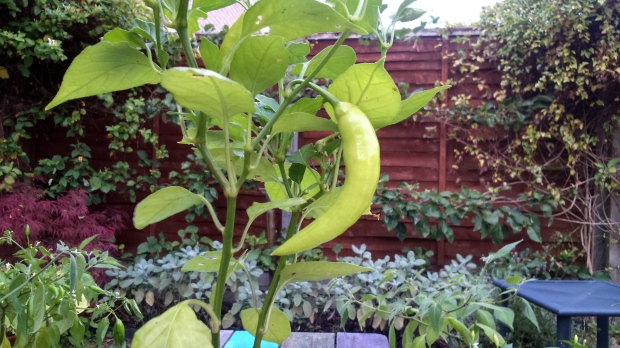 I’ve grown ‘Apache’ for years – it was the first chilli I grew from seed and I love the spicy fruit (70,000-80,000 SHU) which mature to a vibrant red. I only have one ‘Apache’ this year, rescued from a nursery where it was in a sorry state and retailing for an attractive 50p. I refused cake with my cup of tea and bought the chilli and a couple of its spicy neighbours instead.

After some TLC this ‘Apache’ looks much more cheerful

Several varieties have been disappointing this year including some of my favourites – ‘Numex Twilight’ (30,000-50,000 SHU) with its tiny upright multi-coloured fruit, ‘Jalapeno’ (2,500-5,000 SHU) normally a prolific fruiter and the sultry heirloom ‘Hungarian Black’ (around 5,000 SHU). None of these have been heavy croppers this year and seem to have taken a long while to recover from their winter hibernation.

The only ‘Jalapeno’ fruit – although being in the green roof hasn’t helped. An unsuccessful experiment as the plants have suffered from the dry environment. Worth trying, but not to be repeated

‘Numex Twilight’ with its meagre crop in August 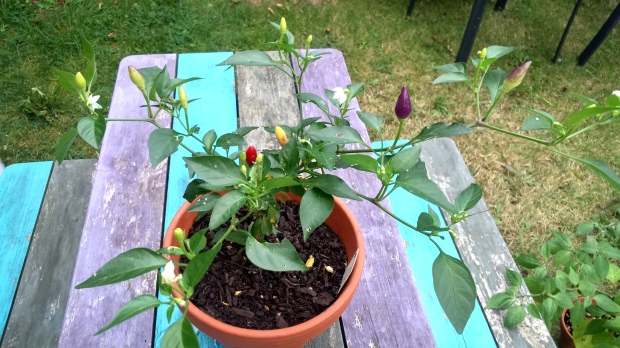 ‘Numex Twilight’ had recovered a little by this week 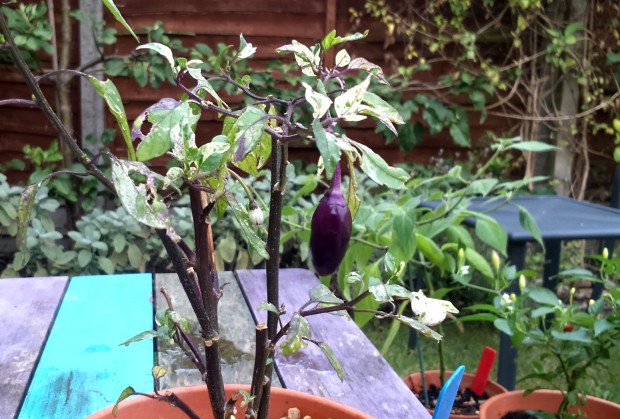 ‘Hungarian Black’ has sulked all summer. Its foliage is naturally variegated, but has been stunted and slow to develop

My tree chillies ‘Alberto’s Locoto’ have also been disappointing so far, with lush foliage and a branching habit, but no flowers at all until the past couple of weeks. I’m not sure what I’m doing wrong – maybe they need feeding more than other varieties – my feeding regime has been rather haphazard this year. They are recommended to be particularly suitable as perennials, so if I can be bothered with the palaver of spare room chillies again this winter maybe they’ll do better for me next year.

Healthy foliage, but no fruit on my ‘Alberto’s Locoto’

New Chillies on the Block 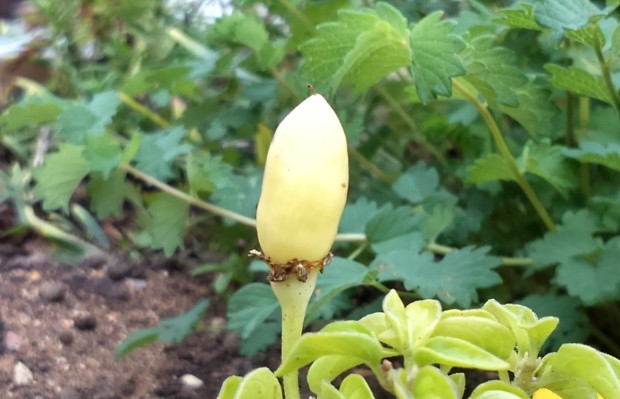 ‘Almapaprika’ is another Hungarian heirloom variety which has unusually shaped rounded cherry fruits and is very mild (1-1,000 SHU). It is also known as Hungarian apple pepper. The chillies start as a pale yellow and mature through orange to a rich red colour. Apparently you need lots of plants if you are going to dry it for paprika which I don’t have, but it tastes good stuffed like Hungarian Hot Wax and is an interesting novelty. 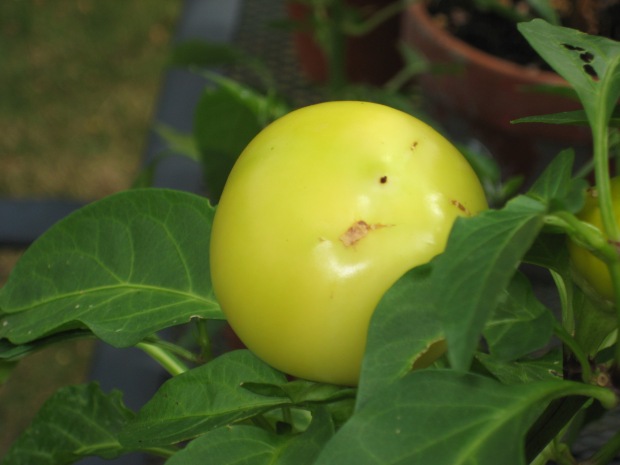 ‘Peruvian Lemon Drop’ is an aji type like ‘Aji Crystal’ and has a rating of 30,000-50,000 SHU. The long, hanging fruits start a pale green and then mature to a light yellow. They are great in curries and good to stuff if you fancy a hot lemony treat.

These ‘Lemon Drop’ chillies will get lighter as they mature 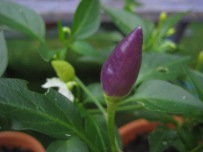 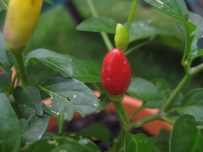 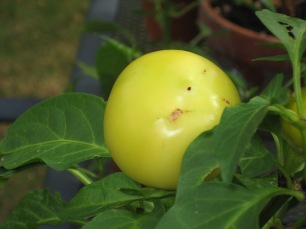 An amazing array of different colours, shapes and sizes – I love chillies as they tick both my boxes – ornamental AND delicious…

So all that remains is to hope for more warm weather so all the chillies will continue to grow and ripen, and start concocting more devilish chilli plans for next year. In the meantime there will be more roasted chilli suppers, Thai curries and still chillies left over to freeze for winter curries, soups and stews. What better way to remember a long, hot summer than with steaming Thai tom kha soup on dark December evenings?

I save seeds from my chillies as well as overwintering some plants and growing new varieties each year. I’ve particularly enjoyed the chillies I’ve either bought as plants or sown from seeds from these sources (these links are not sponsored, but based purely on my own experiences and recommendations):

Pennard Plants – Pennards have a fabulous collection of heirloom vegetables, fruit and herbs, including many chilli pepper seeds which I’ve been sampling and growing for several years. This year I visited their stand at Chelsea and bought a chilli trio recommended by Chris at Pennards. Can’t wait for January so I can sow the seeds and start a whole new chilli journey…

Real Seeds – really unusual varieties with excellent information about the required growing conditions, histories of the cultivars and customer recommendations. I love Real Seeds because every time I visit the website there’s more to learn and new varieties to try…

Suttons Seeds – wide selection of chilli seeds and plants, with some excellent offers later in the year which enabled me to get a set of 10 chilli plug plants this year for £4.99. Suttons have been exploring more unusual vegetables, fruit and herbs over the past few years working with James Wong. I’ve enjoyed sowing their seeds and have now established several plants I’d not be without, such as cucamelons, Chilean guavas and my particular favourite this year… the trombocino (more on my soon-to-be prize winning trombo later in the month) 😉 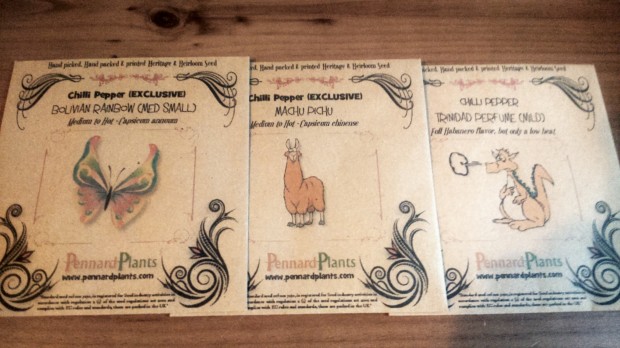 Has the weather been kind to your chillies this year? What varieties have performed well and have there been any disappointments? I’d love to hear your chilli stories, so please do leave me a comment. Thanks 🙂

Quick survey: what would you call a narrow path between fences or houses, or with houses on one side and wilder land on the other? Where does your word come from?
The Ivel in full flow on this sunniest of mornings...
Growing season must be just around the corner now that my #peatfree @dalefootcomposts has arrived... 😊
Cambridge Botanic Garden winter garden - achingly beautiful in the early February sunshine.
Dwarf iris out en masse to fight the gloom...
The self-seeded hellebores my dad gave me have always been shy to flower, but this winter they've found their feet and carpeted the wildlife area.
So pleased to see my piece 'Save Our Hedgehogs' in the latest Gardeners' World Magazine. Includes the results from last year's survey & how best to encourage & support hedgehogs in our gardens.
Always wanted to see the starling murmuration over Brighton Pier. Filled with wild awe & joy at such synchronicity & beauty - sheer artistry. #bucketlist