Sitting on top of the flowery mound with my bare feet in the chamomile I could be on a woodland hilltop, but beyond the medlar and hawthorn the bustle of Hampton Court Flower Show is just visible. What Jon Davies and Andreas Christodoulou of Future Gardens have achieved with London Glades is a space which excites the senses whilst calming the soul. Designed for a client who wants to re-engage with nature in a beautiful and wild setting, this garden creates a quiet sanctuary in busy urban surroundings. Almost every plant is edible and most are perennial and low maintenance, relying on the surrounding ecosystem for support. 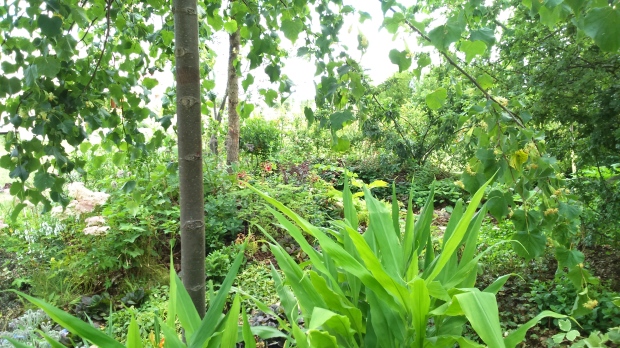 Jon told me they were inspired by Martin Crawford‘s forest garden in Devon and also the permaculture practised by Masanoba Fukuoka in Japan. London Glades feels like a botanical library of fascinating plants in a magical setting – from the shady planting of shuttlecock ferns (Matteuccia struthiopteris) with their edible newly-emerged fronds to the hilltop grasses and meadow flowers which were attracting the damselflies and hoverflies; the whole garden has a sense of being in the moment. Jon has purposely introduced some plants which are not at their best – some have gone over, others are not yet flowering, which creates credibility in a garden that values food production – from roots, leaves, buds and fruits as well as flowers – equally with aesthetics.

The damselflies enjoying the garden as much as I am

The raised areas of the garden are constructed in the German tradition of ‘hugelkultur’ which roughly translates as ‘mound culture’. This involves creating mounds of wood and green waste covered with top soil to mirror the components of the woodland environment. As the material decays it creates a consistent long-term supply of nutrients for the plants which last for twenty years or longer. Heat is created by decomposition, allowing a longer growing season and as the wood breaks down, soil aeration is improved, thus removing the need to dig the beds. Water is absorbed by the mounds and released in drier periods, so irrigation should not be required, except in long periods of drought and they also sequester carbon from the atmosphere. So the ‘hugelkultur’ element of the garden works alongside the creation of a self-sustaining plant ecosystem to minimise the need for human intervention whilst maximising the environmental benefits.

An example of hugelkultur to show how the mounds were constructed

The detail in the garden is magnificent and deserving of the Gold Medal it achieved. The spreading canopy of limes, crab apples and quince creates dappled shade under which the edible crops of horseradish, strawberries, fuchsia, bettony, skirret, masterwort and wineberries are thriving. 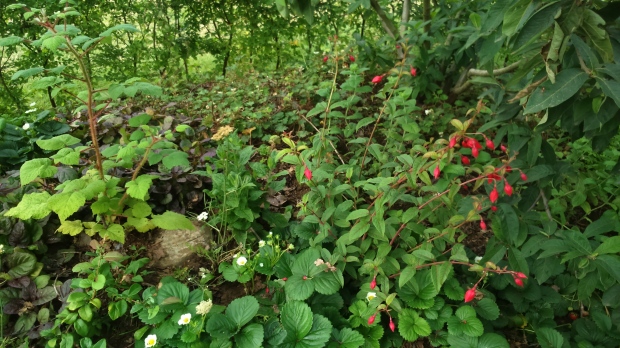 On the mound, lychnis, monarda, oregano, rosemary, mint and chamomile add their aroma to the heady mix of damp woodland and warm hilltop scents.

The mound is a peaceful and productive place to relax

Swales (carefully positioned ditches) collect water for the garden and are filled with moisture loving plants and logs growing shiitake mushrooms. Around the boundary of the garden is an edible hedge, providing berries and fruit for the client and food and habitat for wildlife. But it was the ground cover that drew me into the garden with an almost reverent feeling as I walked barefoot across the alternative lawn of heath pearlwort (Sagina subulata).

The garden is cool and soft underfoot

This delightful evergreen carpet can withstand fairly heavy footfall, tolerates drought or moist conditions, has tiny white flowers in later spring and early summer, and feels soft and springy beneath the feet. Around the margins, a tapestry of other intricate ground cover plants like Leptinella squalida with its tiny fern-like fingers, succulent white stonecrop, red clover and low-growing thymes provide miniature vignettes in which the higher planting layers recede, leaving only the magnified colours and textures of the forest floor.

Fascinating detail on the woodland floor

The dense matrix of planting in London Glades gives the garden a vibrant energy. The visitor is encouraged to move lightly around the space, stopping to sit and relax on one of the large smooth boulders, the only non-plant material in the garden. As I sat, I considered the other reason I felt at home in this garden – there is clearly an educational mission behind London Glades – to show an alternative to the traditional kitchen garden, to showcase how forest gardening can provide sustainable, wildly beautiful, productive spaces in an urban setting, and to offer an alternative way for gardens to connect us with the landscape. 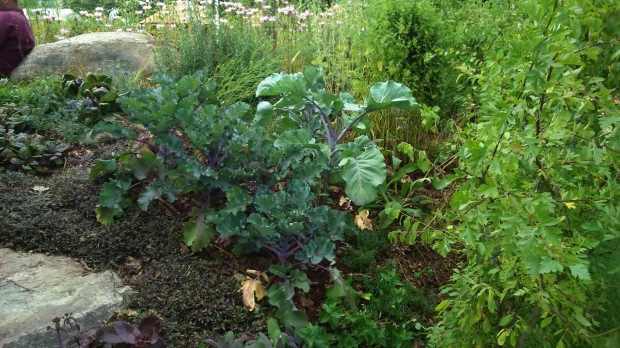 The message is conveyed subtly – at first glance the garden could appear to be a traditional woodland with just a few rhubarb and kale plants visible to the casual observer. However, London Glades offers practical ways to suit forest gardening to small, urban plots, using readily available plants and ingenious, yet traditional methods of landscaping and planting like ‘Hugelkultur’ and swales. Jon is hoping to relocate elements of the garden to Mind charity in Harringay, where it will no doubt continue to provide a peaceful environment and an educational resource.

The winding path through London Glades

Owning a garden like London Glades would certainly be an education, but it would be a gentle, life-affirming way to engage with the land and the sustainable, low-maintenance approach would allow the client to develop their stewardship of their garden. I like this soft approach to learning and have followed similar lines in my own ‘hidden allotment‘ front garden which uses similar plants to my neighbours’ gardens and appears to follow traditional ornamental design, but incorporates many edibles which forest gardener Stephen Barstow would call ‘edimentals’. Jon explained that clients would receive a bespoke book with the initial chapters explaining the thinking behind forest gardening and the second half offering recipes to help with harvesting and using the ‘gourmet’ ingredients which would be available in the garden throughout the year. 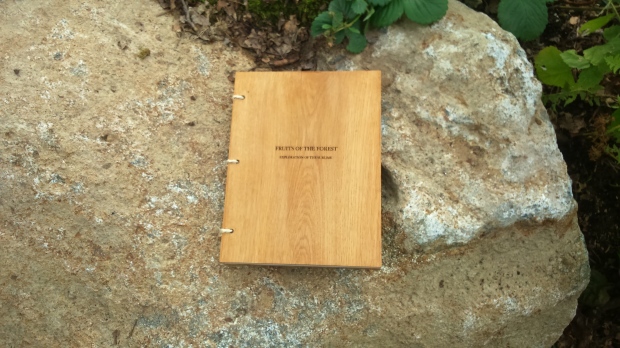 This would be an invaluable resource in a process of learning about the plants and how to make use of them. London Glades takes you on an edible journey of discovery through different habitats and plant ecosystems. The stewardship of such a garden would be certainly be an inspiring and fulfilling adventure.

Soft pink monarda creates a gentle atmosphere in the understorey

If you’d like to read more about edible and sustainable planting at Hampton Court over the next few days and follow my blog as I experiment with all manner of fruit, vegetables and herbs, do subscribe below…

Dogwooddays does not take any responsibility for any adverse effects from the use of plants. Not everyone reacts positively to all edible plants or other plant uses. Always seek advice from a professional before using a plant medicinally.

Pottering at Paxton Pits & roaming round the heath at Sandy. Lovely views of goldeneye, red-crested pochard & great white egret. If 2022 carries on like this, it can stay.
A hazel staff is the best walking companion, especially in the wetlands after dark. I cut this one while coppicing, then forgot & left it in the hawthorns. They protected it until I returned. Perhaps now it will lead me, sure-footed, along even the boggiest of paths?
Enjoying tea & mince pies after our Christmas coppicing session.
Head torches on, tawny owl calling as we make our way out of the woods. Lovely day in my happy place.
So enjoyed giving a talk on the wild side this evening to a lovely group of enthusiastic, welcoming Bedfordshire gardeners. Great to chat afterwards too about peat-free plants and the ways our gardens can connect with the wider landscape.
Day in the reedbeds clearing ditches. I'm more sludge than human - certainly in terms of how I smell!! Time for a shower! 😳
Just when I think I've picked the last tomatoes & chillies, the greenhouse surprises me again.
Lovely walk with my dad around Oughton Head in Hitchin this morning. Here's the watcher over the water meadow. Also siskin in the alders, redwing in every hawthorn and, just before we left, a stoat leapt out of the brambles. November joy! 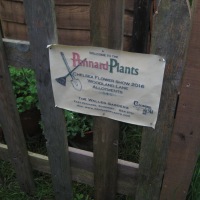