It was a busy day at the 40 Sunbury Road Garden in the Great Pavilion as the Westland Rising Stars of the Garden Centre Industry brought their quirky container gardens to take pride of place on the stand. The garden has been created by the Horticultural Trade Association (HTA) and the Association of Professional Landscapers (APL) in conjunction with Peter Seabrook and The Sun to celebrate Peter’s forty years working at the newspaper as its gardening correspondent. A refreshing garden, 40 Sunbury Road depicts a fairly typical back garden (16m x 5m) complete with lawn, sandpit and rotary washing line – not unlike my own garden. The lawn is surrounded by interesting, varied planting such as a living WonderWall with strawberries (Marshalls Fragraria x ananassa ‘Marshmello’), begonias and a selection of different thymes.

Shed with green wall, insect houses and green roof above

As well as introducing five new plants entered for the RHS Chelsea Plant of the Year Award (won by Suttons for Mulberry Charlotte Russe ‘Matsunaga’ which I have been enjoying growing at home this year), the garden is playing host to the Westland Horticulture’s Rising Stars Containers, designed and planted by three of this year’s Rising Stars (a programme, now in its ninth year, which offers young garden centre stars of the future coaching sessions to help them get ahead in the world of horticultural retail.) All three Rising Stars based their designs around the theme ‘unusual containers’ drawing on personal experiences and offering ideas that can be adapted and used in ordinary gardens.

Sarah Stewart from Klondyke Garden Centre in Polmont, Scotland, used a kettle barbecue as her container, filling it with a selection of alpines, ferns and grasses, along with a miniature red telephone box, post box and Union Jack bunting. She told me that her container celebrates her family’s tradition of having barbecues whenever possible. Living in Scotland, they brave the weather and take every opportunity to get together outside, come rain or shine.

Emma Blackmore from Bents Garden Centre in Preston created a container garden in a pink toy car from the children’s ‘Boutique at Bents’ range. She planted it with cheerful pink and purple bedding and strawberries inspired by her two year old daughter’s love of the garden. Emma works in the bedding department at Bents and enjoys the creativity involved in designing container and hanging basket planting. Emma’s container won her the David Colgrave Foundation Award and she was presented with a certificate and £250 towards further training. 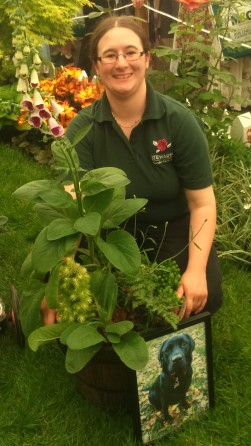 Kathryn with her container and picture of Harley

Kathryn Hunt from Stewarts Garden Centre in Christchurch, Dorset turned to woodland planting for her container which was created in homage to her five year old black Labrador Harley who died last year. She chose plants which grow in Black Park where Harvey used to enjoy going for walks. The container is a rustic barrel and the display is top-dressed with bark to add to the woodland look. This container would suit a shady area of the garden or patio and would fit well in a cottage or informal garden.

Keith Nicholson, Marketing Director for Westland Horticulture, sponsors of the Rising Stars Programme said “This is a fantastic opportunity for the Rising Stars and their garden centres to exhibit at the prestigious RHS Chelsea Flower Show. Not only will they have the opportunity to experience another element of the horticultural industry, but they will also be part of the most important horticultural event in the world!”

So much interest in such a small space

40 Sunbury Road reaches out to the public, offering ideas of ornamental and edible planting for real gardens, whilst also encouraging the next generation of horticultural experts to develop their skills. As I left the garden I overheard a couple discussing the garden and the barbecue container, remarking that they had an unused barbecue at home which they could repurpose using Sarah’s container garden as a guide. This conversation demonstrates that 40 Sunbury Road fulfils its purpose as both a beautiful artistic creation and an inspiration space with practical ideas which anyone can take home and try in their own back garden. 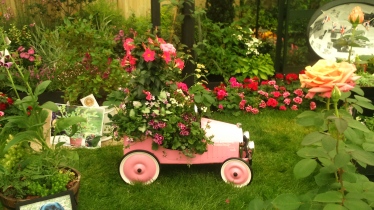