Ten years ago I went on the allotment waiting list. Local sites are heavily oversubscribed and I was expecting a substantial wait. Five years later, with one small child and another on the way I decided to come off the list as allotmenteering seemed unfeasible in the blur of family life. Instead we worked on our new garden, trying to include as much space for growing as possible. 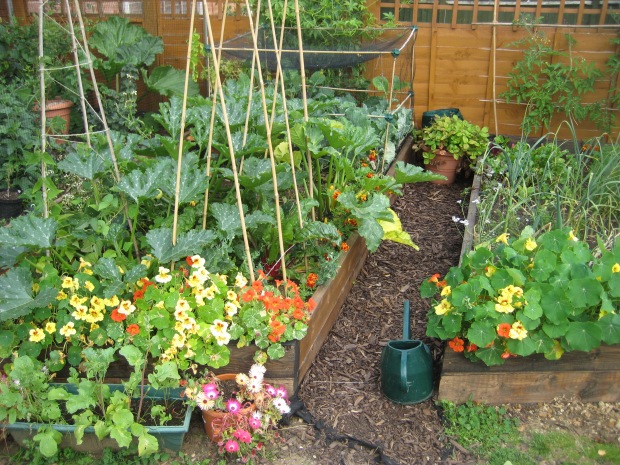 The mini-potager in our back garden

Put off but not forgotten

But I still had a secret hankering for more space – for growing brassicas, potatoes and other crops which aren’t really worth the space in our small raised beds, for experimenting with new plants, for a cutting garden, for oca trials, for experiencing gluts … the list went on and on! Then, this year, with school for my youngest on the horizon, I decided it was time to rejoin the list. Perhaps in a mere six years we would have our own allotment waiting for us… Three months later I received a phone call and within a week we took over Plot 98B with a certain amount of trepidation. 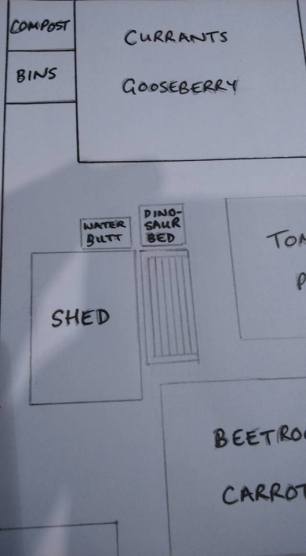 The plot in early April… then dug over ready for potatoes

We chose 98B out of 3 possibilities. Plus points included 4 established rhubarb plants, 2 long rows of autumn raspberries, 3 blackcurrants (or some may be reds), 2 compost bins, a shed, a strawberry raised bed and resident celeriac and broad beans. Also one of the other plots had swede and leeks – ours didn’t (another plus point).

The shed needs some sorting (tidying, water butt fitting, minor repairs), but overall is in pretty good nick. The plot does have quite a lot of perennial weeds, mostly couch grass and poppies with some bindweed thrown in for good measure, but the poppies look stunning and were covered in bees this morning, so at least we’re doing our bit for pollinators!

The celeriac was swiftly despatched into several batches of soup and I’ve been harvesting the broad beans with the kids to be eaten young, barely parboiled in salads. The broad beans and poppies seem to be harmoniously sharing the same space – we’ll have a go at digging out the poppies and their long tap roots when the beans are over. The rhubarb has already manfully supplied several crumbles, pots of stewed fruit and 4 or 5 rhubarb sponges (my favourite). It’s now destined for cordial and jam.

The plot is split up into 6 beds and the fruit takes up 1 1/2, leaving 4 1/2 beds to play with. Today I’ve dug over the 1/2 bed between the rhubarb and Jerusalem artichokes and planted 2 courgette ‘Tricolor’ and one Fuchsia berry which we’re trying this year for its fruits. We have four more to plant but this one is the guinea pig (I didn’t tell it) to see if anything eats the plant (slugs, snails, birds, deer…) If so, I’ll need to protect the others when I plant them out.

Courgettes and fuchsia berry planted out

One bed has already been planted with potatoes ‘Lady Christl’, shallots ‘Picasso’ and onions ‘Red Baron’. That leaves 2 more beds to dig over and plant – with my trial oca plants (all 14 of them!), a runner bean, cucamelon and trombocino wigwam, brassicas (Brussel sprouts ‘Rubine’ and Kohlrabi ‘Olivia F1’) and root crops (Celeriac ‘Monarch’ and a mix of rainbow carrots and beetroot). I feel very behind where I’d like to be, but having only taken on the plot in April and with a small family in tow most of the time I guess I should be pleased with any progress we make! 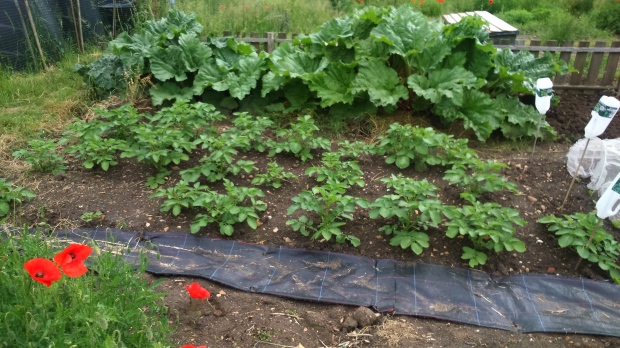 One happy chance find (or possibly not – I’ll let you know) is the large clump of Jerusalem artichokes in the corner of the plot. I’m ambivalent about their taste and have not really found any super successful recipes, but judging by the amount we will be unearthing in November I’d better get working on a range of delicious ways to cook them! We dug out a large area which had encroached on the path last week and passed a couple of bags of tubers on to other people courtesy of a local facebook gardening swap site (not without the warning that it might be better to plant them in a big pot rather than in the ground).

The Jerusalem artichokes are big, bold and a little intimidating

The kids are enjoying their allotment experience. They’ve made new small friends on neighbouring plots, ‘helped’ digging holes, watering and we’ve been working on their own dinosaur garden. They chose the plants (the most yellow form of heuchera they could find – ‘Electra’ as yellow is their favourite colour) and planted them in a tyre which we got from the local garage.

‘Planting’ trees in the dinosaur garden

They’ve collected stones to put around the edge and we’ve started painting the tyre with acrylic paints (yellow) to live it up a bit. Then the big pot of dinosaurs comes out every visit and they create a Jurassic scene. We’ve also had the bug box out examining the mini-beasts on the plot (snails, snails, snails… and slugs) and they’ve both got grubby and tired – result!

The dinosaurs have found a new home

The heuchera in the dinosaur garden

All in all the first few weeks of having an allotment has been fun, we’re already eating the proceeds and I’m looking forward watching it grow, weeds and all.

I found this little beauty, Tragopogon porrifolius (Purple Salsify), growing wild in the meadow verge adjacent to the allotment path

What hints and tips would you give to newbie allotmenteers like us? Please leave a comment for us – we’d love to hear your thoughts. To see our allotment as it develops, follow the blog here: 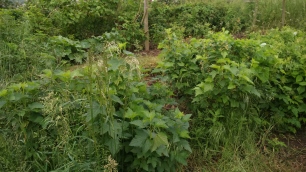 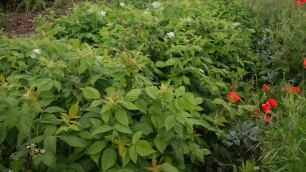 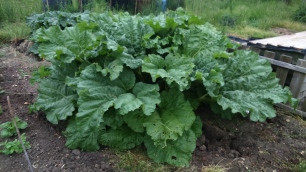 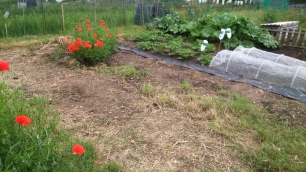 Onion/shallot bed and the rest of our, as yet unplanted, growing space

16 thoughts on “Allotment 96B: New Beginnings”

It was my childhood dream to see a hoopoe & today I got to write about it in my Guardian Country Diary. This one’s for you, Dad xx
Little walk to the end of the road to watch bees feeding on old man's beard. Luckily someone had put a handy road sign there for me to sit on. #madeitoutofbed #travellersjoy
Lovely morning leading a walk at Purwell Ninesprings reserve with a friendly, enthusiastic group of local carers. Nothing better than sharing a place you love & its natural/social history with other interested folk.💚😊💚
Lovely to see my piece about family history, place and my links to the poet John Clare on The Clearing today. Big thanks to @littletollerdorset for giving me the opportunity to share the story with readers.😊💚 Link in bio...
Made it to the campsite which is a bloody miracle considering I've been mostly horizontal & out-of-action this weekend. And now I can see the River Great Ouse...🛶 💦
It was a real pleasure to run this nature writing workshop for the @sussexwildlifetrust yesterday, supported by @meactnetuk. Now uploaded to YouTube if you'd like to watch. Everyone welcome, no writing experience necessary. (Link in bio)
Snicket wayfarers. Rhapsody in blue - or is it violet? 💜
All excited in my Guardian country diary today when the spuggies come house hunting and get up to mischief in the garden... 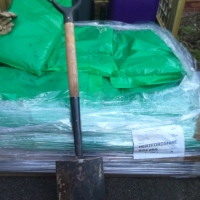 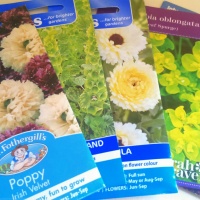 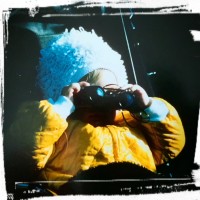